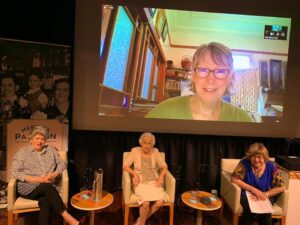 Julie Nichles, Helen Kentos and Beulah Castan in conversation with Dr Toni Risson about growing up in Greek cafes

The early history of Greek migration to Australia is largely a story about young men. Women are the unsung heroes of this singularly Australian phenomenon. Imagine the courage of young Greek women who left their mothers, their homeland and their culture, and travelled across the world to marry men they had never met, men who might be twice their age, and live in communities where they knew no one and could not even speak the language. The ingredients they employed in their kitchens – garlic, olive oil, basil, yoghurt – were unheard of, although olive oil might be found on the chemist shelf.

As second generation migrants born to cafe families, girls took charge of the cash register, perhaps at the age of seven, standing on a soft drink box or Mintie tin behind the confectionery counter. They worked in the shop before and after school and on weekends, and since Greek cafes were open all day every day except for Christmas Day, on school holidays too.

Greek women raised children while supporting their husbands in the family business. This might mean washing nappies at two in the morning. It might mean living in rooms above the shop, cooking and eating in the cafe and enjoying only a small private space.

The unpaid labour of women and children helped to enable cafes to flourish and is the reason many of them survived as long as they did.